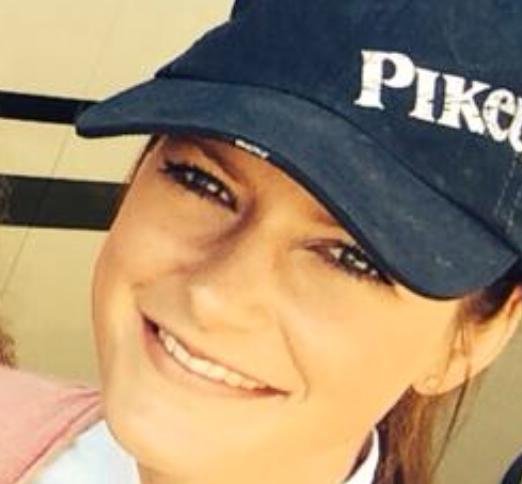 Kirstin Skjoldshøj (1981) is a Danish rider living in Næstved in Sealand about one hour from Copenhagen.

Kirstin owns Baunehøj Ridecenter, which have place for around 50 horses on stable, and really great facilities for horses and riding.

Kirstin has ridden since before she was 3 years old, and did her first showjumping competition at 7.

With the young horses Kirstin has represented Denmark and the Danish Warmblood at the World Breeding Championships for Young horses at Zangersheide, Belgium, and has ridden several young horses in the Scandinavian Open competition in Falsterbo, Sweden, with very good results.

Now Kirstin has got some really good and talented horses for showjumping, and competes and has victories in showjumping competitions up to 1.45 m level (earlier up to 1.50 m.)

She has since the late 2017, started up a dressage carreer besides the showjumping, with the former showjumper Cassiopeia. They have had a very succesfull beginning with may placings and victories in the M classes, and i 2018, they were 2nd placed in the Senior championships for Sealand (Sjællandsmesterskabet for seniorer) and 2nd placed in the region championships (distriktsmesterskabet) and most winning in the whole year in our region in dressage with Cassiopeia AND in showjumping with Carma! In 2019 Kirstin had a maternity break, but she is back and has before the Covid-19 break, had very good results CSI** Herning.

In 2020 Kirstin will continue working with- and competing both young and experienced horses in showjumping as well as dressage to develope herself and the horses in the best way possible. :-)

Kirstin has educated herself as a physiotherapist from University College Sjælland, and besides riding and teaching, she is also treating people with different disabilities and diseases, during physiotherapy with horses at Baunehøj Ridecenter.